Why Final Fantasy 6 must have a remake after 7?

1.It is loved by critics, It got a 9.5 out of 10 in IGN and it managed to tie with 7 despite of the limitations of technology.

2. Kefka is a very iconic villain- he is this evil clown who is depressed by his mortality which drives him to madness and desire for power. He killed millions of people just for the kicks of it . He started as a harmless looking Joke character but as the story progress you see the evil incarnate that he is. Final Fantasy 14 and Dissidia also created a resurgence of his popularity.

3.Terra is a Unique Protagonist- She is a brave heroine but does not have the typical badass exterior that Squall,Cloud,Lightning and Noctis have. She is a compassionate young woman who is the opposite of Kefka. She also have an amazing growth as character. There is also a lot of mystery about her identity that gets unveiled as the story progresses.

4. Every member of the cast feels important- Terra is the lead character but her team mates have great story arcs of their own.

Cyan is dealing with Survivor's guilt. Celes is a suicidal woman who will find purpose on her life when she meets Locke.The love story between Celes and Locke has been praised by the critics. Edgar and Sabin are separated brothers who wanted to reunite.

5.The over the top visuals that can be achieved by a remake- Sabin's suplex city is the best example.

6. 8 and 9 recenly got remasters and the games actually aged well.

Kefka is the best.

This game also tackles racism which is very timely now. Terra is half Esper and that made her discriminated all her life. Though Terra is depicted as a Blonde these days I think they should stick with the Green hair. Blonde is a desired hair color. So making her hair green makes the discrimination more authentic. Making her hair green mean she is not human.

I think the development team at Square Enix has considered a remake of Final Fantasy 6-so maybe someday they may get it made. But they even say, that Final Fantasy 7 may be awhile as well, before this title is released ?

I read an article online where producer Yoshinori Kitase admits that the development team has at least considered a remake of the classic release.

Another reason for a Final Fantasy 6 remake is this party member. 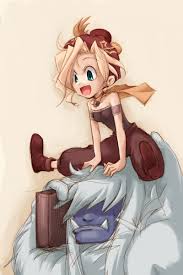 Her paintings come true! Imagine if such powers got animated in 3d.

I think that given into consideration how the remake of Final Fantasy 7 panned out, it wouldn't be a bad idea if FF 6 followed suit in such manner. I'm quite certain and confident that it's going to have more people gunning for it once it's done.

I love 6 because it's plot and story is the best of the series but before Square start making remakes they should make the FF7 remake first so it won't be the next Duke Nukem forever.

WWE wrestler Samoa Joe is a huge fan of Six, he said that Kefka is better than Sephiroth. He is the ultimate evil after all.

The announcement of Resident evil 2 remake and teasing of a Resident evil 3 remake gives me hope that Final Fantasy 6 will have a remake someday.I am sure 7 is a high priority because there is no way 8,9,10 will have a remake first as they already have remasters recently. 6 transitioning to 3d will be an spectacle because it has one of the best cast ever.
Z

The Game have a deep lore and Amazing storyline. I would love to see this game with current gen graphics. I will definitely buy a remake of this game.

It is a replay Value Bonanza! People can choose their own hero just in case they don't like Terra. Kefka is also the most evil villain of all time. He is able to make someone like Wesker looks nice.

If people think Sephiroth is evil, They haven't met Kefka. Kefka is the most evil villain in the history of the franchise.

Celes and Locke have the greatest videogame love story in history. Their romance should be seen in 4k CGI.

Younger Generations refuses to play games with pixelated graphics. Final Fantasy 6 deserves to be remembered. It should not be a footnote in history. It needs a new life through a real remake and not another remaster.

If Someone like Samoa Joe loves this games, that shows this game is for people with good taste!