Stranger of Paradise Beginner Guide: Getting Started Tips and Tricks I Wish I Knew Before Playing
YouTube
0 0 58
7:27

During last night's Game Awards Square unveiled their latest Final Fantasy 7 Remake trailer. There are now several of these out there, the last one wasn't that long ago, and this new one doesn't reveal any new areas, or the rumored additional content Square could be putting in to extend the length of Midgar.

However, you WILL be seeing Cloud getting chewed out by Barret in full English, and that makes it worth a watch to us. Square's press release below has it, AND newly revealed details on preorder bonuses.


LOS ANGELES (Dec. 13, 2019) – SQUARE ENIX® gave gamers across the globe a holiday surprise when the company showcased the latest trailer for the highly-anticipated FINAL FANTASY® VII REMAKE at The Game Awards last night. The action-packed video explores the backstory of the game's hero, Cloud, and his connection to the underground resistance group, Avalanche, and their struggle to save the planet from the shadowy Shinra Electric Company.

The FINAL FANTASY VII REMAKE trailer for The Game Awards 2019 is available here: .

Details on these exclusive items include:

Available for the PlayStation®4 computer entertainment system on March 3, 2020, FINAL FANTASY VII REMAKE is a reimagining of the iconic original game that re-defined the RPG genre, diving deeper into the world and its characters than ever before. The first game in the project will be set in the eclectic city of Midgar and presents a fully standalone gaming experience that provides a great starting point to the series. Along with unforgettable characters and a powerful story, FINAL FANTASY VII REMAKE features a hybrid battle system that merges real-time action with strategic, command-based combat.

The title is rated T (Teen). Please visit the Entertainment Software Rating Board (ESRB) website at www.esrb.org for more information about ratings.

I am so hyped with this new trailer! I can't wait for April so I can play the remake finally. This is starting to look better than FFXV finally! I see a lot of potential for 7!! It is so going to get nominated for Game of the year.
F

I never played the original because my 1st game is Final Fantasy X. Which is weird because I recently played 6.I think I will wait for the remake instead of playing the original.

Squall being Tsundere to his teammates but he will be the person who will be impact by Aeris *I won't mention spoilers* Oh Jessie seemed like she have longer role for this new edition. Her role is much more shorter in the original. I wonder if they will make changes on her fate.

@
doep djuer
I love how to managed to hide the spoilers while still talking about it. Oh Well this game is almost 3 decades old already so newbies should be aware of the plot of a game as mainstream and legendary as the original.

When Tiffa said " I am glad that you are back" to Cloud, I just realized I also feel the same. I am so glad that my childhood heroes are now looking fine and dandy with modern day graphics. I also love that they go for stylized graphics instead of realistic. Realistic works well for XV but VII is more Anime influenced so stylized designs is better than realistic.

I can't wait for March! I will play this in one day without eating and sleeping!

I can't wait to play the first episode! It makes me wonder why time runs slow when we are excited about something! This trailer hyped me! It seemed like there might be some changes in the plot.

How did I miss this! I am so away from Social media and the internet for a long time that I missed this.

The Trailer gave me an out of body experience! I am so glad that this remake didn't end up as vaporware because I thought it will never happen after the controversies of 15. I enjoyed the original despite of it's limited graphics back then. Though I know the plot of the game I am going to play this remake to see the game how it is originally visioned with the right technology.

I wonder if Zack will make an appearance on this game in any kind of form. He is a dead prequel character but he is part of Aerith's backstory. He is the reason she became a flower vendor to begin with. Also Cloud reminds her of him. I wonder if she will mention his existence to her teammates. A minor easter egg will be enough to make me happy. I want Zack's existed to be acknowledged on this game as he is part of the backstory of one of the major characters.

I heard they pushed the date from March 3 to April 20 to allow the team enough time for finishing touches. I didn't play the 1997 FFVII so I'm really excited for the remake.

This is the scene from the original that I want to see in the remake. This scene looks amazing already on its limited technology and graphics. Imagine how it would look with modern graphics. 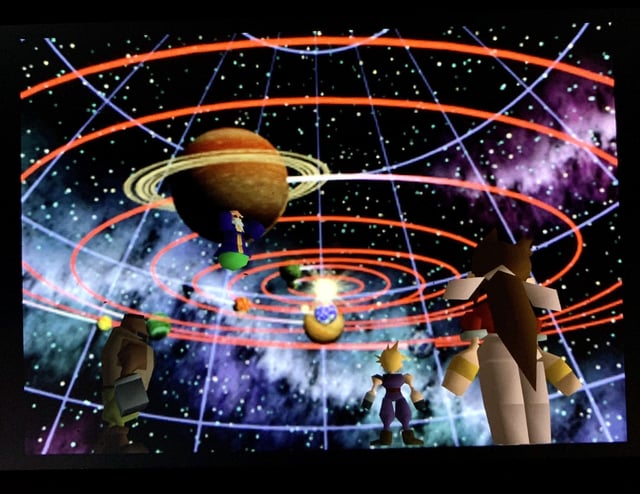 Imagine all the visuals and colors this scene will have with modern day CGI. It is going to be very breathtaking. Also I want to see the death of a certain character I will not name to prevent spoilers for new players. The death of the character I am talking about will be more dramatic with modern graphics.
D

Cloud is the most beautiful man in existence! He is so pretty that he is even prettier than the girls. He is sadly not real but if he is real, I will marry him. Just kidding. This trailer really hypes me up!
You must log in or register to reply here.
Share:
Facebook Twitter Reddit Pinterest Tumblr WhatsApp Email Share