Squall is not Dead

This recent Kotaku article debunks some of the popular fan theories.
https://kotaku.com/is-squall-really-dead-final-fantasy-producer-addresses-1800007113

I don't really like Kotaku, but that's an interesting article. I'm not sure however if I feel better with him debunking many of these theories. Speculation is part of the fun and crazy conspiracy theories are fun to read if nothing else.

It's funny to see that after all the googling I did I never found that article. One of my favourite theories was that you could bring Aeris back to life in FF7. I never was able to do that and it seems I never will.

The theory about Rinoa actually being Ultimecia seemed very plausible to me with all the time travel that takes place. I mean, it would be so cool if Rinoa was the one destroying the world and also one of the people who eventually save it. That creates a paradox too. Like if Rinoa stopped herself and the world was a better place then she should've never travelled back in the first place. Otherwise it would have to be that Rinoa slowly grew evil which while juicy would be a major bummer for me.
Last edited: Jan 4, 2018

Why the hell did Kitase have to debunk all the fun theories which fans had? I always thought Ultimecia was Rinoa, who became evil witch because she went crazy after Squall died.

How would Kitase explain that they both looked almost identical, when their faces were shown on the screen?

And now it turns out Squall is not even dead. Apparently he only suffered a minor damage LOL

Though not part of the Final Fantasy 8 canon, Squall is alive at Kingdom Hearts and he is using a new identity called Leon.

If there is a canonical sequel for Final Fantasy 8, we might finally know his status.

For me Squall is really alive. He never died, and I don't want him dead. Haha. It will be so cheesy to found out if it is really just squall dreaming about everything.

And yes, It will be cool if they made Rinoa the Ultimeacia. It will be hard to figure out how it will work but i found it awesome.

I believe the Ultimecia is Squall and Rinoa's great grand daughter theory. So he decided to leave Rinoa even though he loves her so Ultimecia won't be born.
S

I remember trying to convince my friends in high school that it was Rinoa who had died. That shot of her space suit shattering? Highly significant. Alot of people - including this guy - ignore it. I think that she died in space - Squall never reached her. He is a complete failure at saving the one thing he cares most about. The rest of the game after this point is some sort of sick denial by Squall that she is really gone. There are some scenes after this where it appears as if no one else seems to notice Rinoa except him. (Sorry, I don't remember the specific scenes, it's been a while). I know there are holes in that part, but that was traumatic for him, and he is just oozing denial - perhaps to the point of hallucinations. Or maybe it's Ultimecia playing with his mind. Who knows. The whole mind **** with the blurring Rinoa is him realizing that she is dead, with the shattered helmet at the end finally confirming it for him.

After the final boss, the characters are all running through the time compression trying to get back to their world. Squall ends up in that desert where he collapses, horrified by the certainty of returning to a world without Rinoa. In this mixed up compressed world where dimensions meet (or something) Dead Rinoa finds Squall (or maybe he's imagining it - it doesn't matter) and he dies with the conscious choice of giving his existence so that she can return to the real world. (Don't say that if he died and kept her dead they would be together forever. There's no heaven in Final Fantasy, only Lifestream). Also, this rights his wrong from when he failed to save her in space.

Everyone escapes the compression, with Rinoa returning instead of Squall. He is nowhere to be seen in the home video at the end. However, we see Rinoa point to a shooting star. So she exists.

Rinoa is on the balcony. Alone. Seriously, watch it and tell me shes not alone. Unless Squall is purposely squeezed in the corner against the wall over her right shoulder, she is alone. And don't tell me it was an artistic choice to reveal him like that. He's not there. She points to a star, and suddenly Squall is there kissing her. We know from the home video segment that he didn't walk up a second before the point. He's not really there - she's imagining it. He ultimate fantasy. It's quite a bittersweet ending.

I think that this all fits the expressed theme of the game - Love. Squall makes the ultimate sacrifice, a selfless act that he would have been out of character before Rinoa came into his life. She had a profound impact on him, and, if anything, his sacrifice teaches us that it is better to have loved and lost (and died), than never to have loved at all (so cliche).

mbuzma said:
I don't really like Kotaku, but that's an interesting article. I'm not sure however if I feel better with him debunking many of these theories. Speculation is part of the fun and crazy conspiracy theories are fun to read if nothing else.
Click to expand... 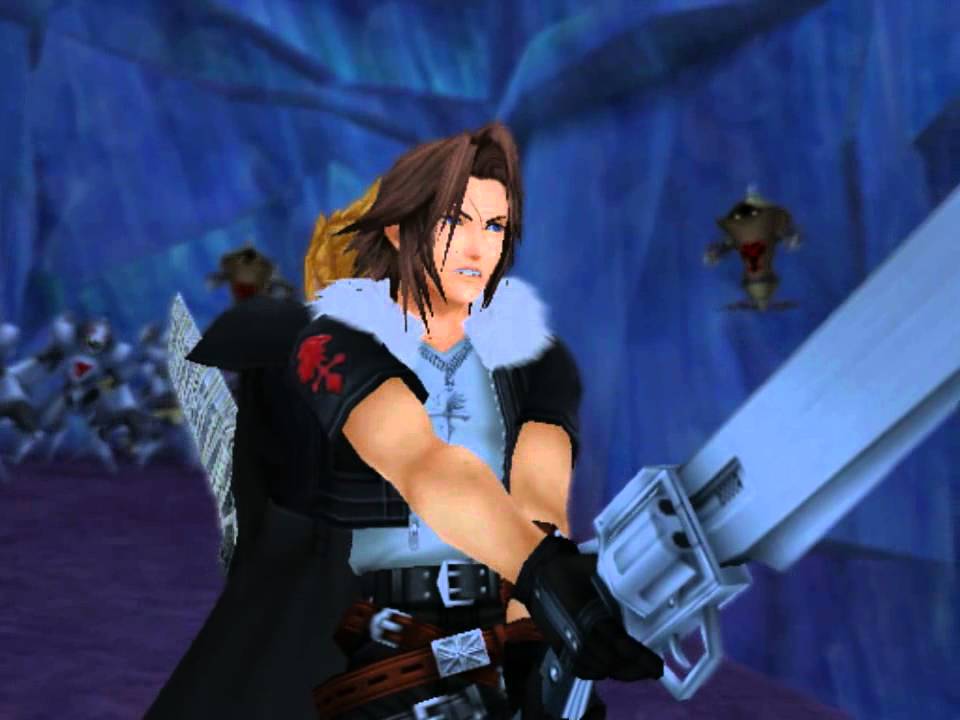 He also have this creepy stripper outfit. A Final Fantasy 8-2 must happen so we will finally know his fate. If he is dead, Rinoa may takeover as protagonist since that happens in the sequels of 10. Tidus was replaced by Yuna.

I think he is not dead, otherwise everything from disc 2 would not make sense.

It's not over yet. In fact, he's actually confirmed it. Before, he said no, after, he said yes. Did you not read the part where he says he likes the idea and may add it to the remake? This implies that his own perspective on his own game FF8 has changed, being that Squall *can* be dead.

I really do not think Squall is dead and he has survived some how, and is alive and well- but they really never in this game, tell you about his wound or how he survived. I would say Squall was wounded pretty bad- and some say Edea healed Squall back to health as well for some reason ?

Square Enix never confirmed if Kingdom Hearts is canon to Final Fantasy lore but for sure it is not since it is a crossover. Squall is very much alive and kicking on that game.

That Game though shows how Squall Matures. It can be a teaser what a potential VIII-2 will look be like plotwise.

Even though I was never a fan of Final Fantasy 8, but I'm sure as hell that Squall isn't dead because he appeared in Kingdom of hearts. I did wished I was interested in playing FF 8 to know more about the story line, maybe I will still give it a trial in the future.

Squall Leonhear is not dead, and I would never wish not to have featuring in the game anymore. I loved his love life and adventure with Rinoa, they were ready to die for each other. Squall battle with Seifer_Leonhart left him with a scare on the face which I think looks sexy by the way.

I don't think any of us will know for sure. I like to think he is alive and all is sunshine and roses, but that may be because I worked to beat the game. I want a happy ending. But, I also accept there is more decent evidence to point towards the chance that he is dead at the end. I can understand the use of being subtle here; it allows the player to decide for themselves how things end that is fun to look at and try and figure out.

The music video of eyes on me starts the Squall is dead theory.

His death scene is on that music video which is also the ending. 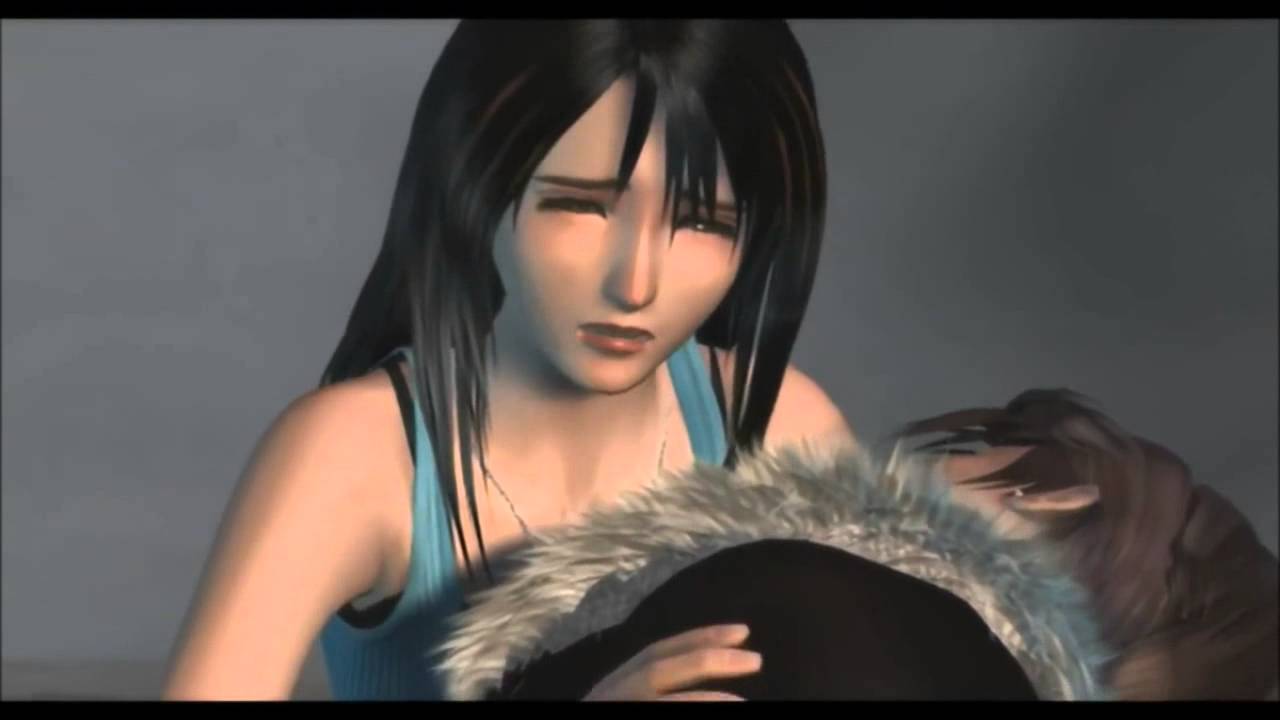 Bartz_FFV said:
The music video of eyes on my starts the Squall is dead theory.

His death scene is on that music video which is also the ending.

The death of Aerith actually pained me a lot but I'm quite sure that Cloud would avenge Aerith's death.

This scene is one of the most prominent evidence theorist use on why Squall is dead. A very scarring photo but makes sense.