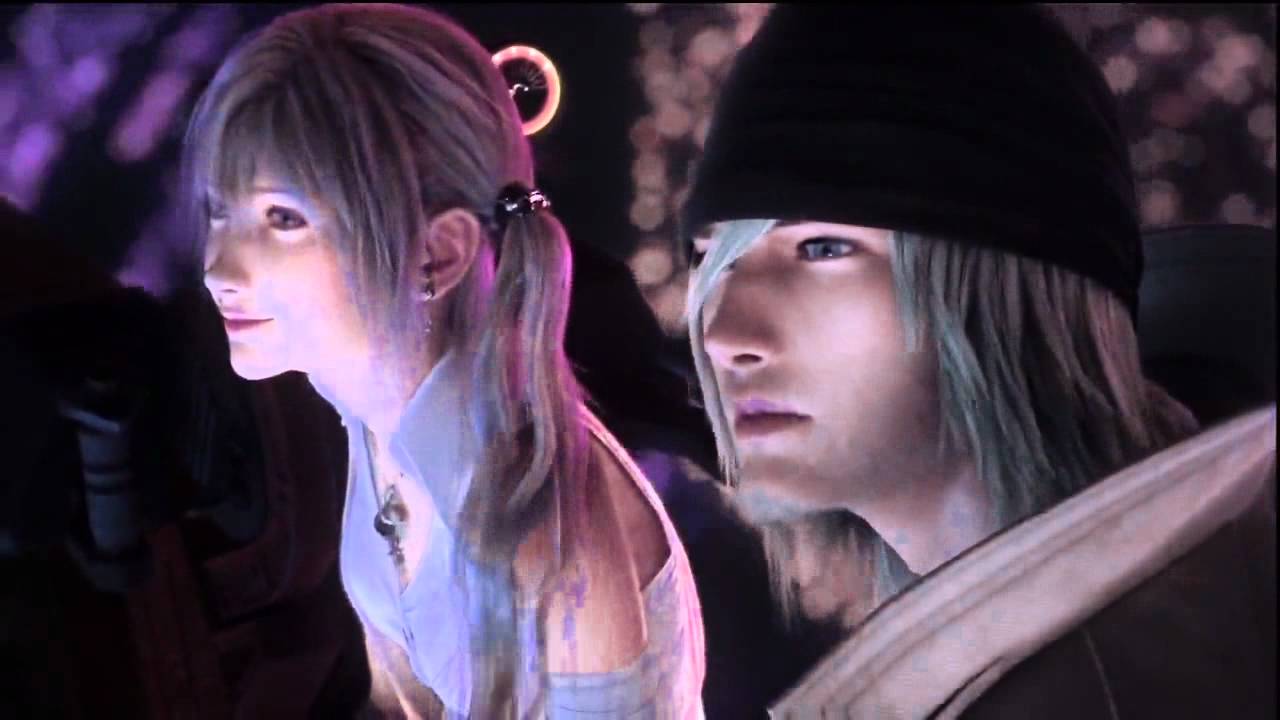 Serah loves Snow that they even got engaged but her Sister Lightning doesn't like him and most people think he is annoying. Snow and Serah do loves each other it's just the fans don't want her with him. Fans find him annoying because of his over the top screaming of Serah's name when he is trying to save her and people can't relate with his hero complex. He is actually a very optimistic guy and his personality is similar to Rinoa who is a well loved character.

Noel is the good guy who never gets the girl.

Noel is the most well received character of Final Fantasy 13-2. Lightning sent Noel back in the past via time travelling so her life will be saved. Noel became Serah's partners on her adventures.

When Noel travelled back from the Past, Serah haven't met Snow yet. So it is not cheating if he will pursue Serah romantically right?

His body language on this game shows that he have feelingss for her but she only see him as a friend . Their pairing is well received by the fanbase despite of the fact it is one sided and they never kissed.

Well on the bright side, When Serah died, She died on his arms.

I would say Noel dosen't get the girl this time as well in Final Fantasy 13- after all, Serah is Snow's fiancee- and besides they look like they would not be physically attracted to each other-but Noel and Serah do look like they could be brother and sister though, and love each other in that way !

Noel survived whatever killed the rest of humanity. Superior genetics are superior. Serah would be doing the world a favor by making babies with Noel. In fact every female should make babies with Noel.

People relate more with Noel because many men had experienced being friend zoned. It is really hard for me to pin point why Snow is unlikable but he is like the heroic version of the annoying highchool jocks from teen movies. It is also not helpful he is one of the weakest character gameplay wise.

I voted for Snow because he is her official love interest. He is also very heroic and brave and it shows whenever he tries to save her. Also he remained dedicated with her even if he is going to have the Sister in Law from hell. If I am going to have Lightning as a sister in law, I will break up with the woman because Lightning is irritatingly protective.

Noel! He had more on screen chemistry with Serah and I think Lightning would have approved him. He doesn't have a deliciously punchable face like Snow.

Neither because she should be with me I will protect her better than her sister,friend and fiancee did. I will introduce her to my parents and she will get married. I will put a restraining order against her sister so she won't punch me.

I think Serah and Snow would make it perfectly because of how Snow saves her all the time. I can imagine of Snow as my hero who is heroic with Serah. Ofcourse, I imagine me to be Serah and then the chemistry begins.

Snow had a chance of temptation when he went to save Lightning from the hell. Sister-in-law could have been a reason for being tempted, but it is important to notice Snow's dedication towards Serah.

I would defiantly fall for Snow because he is the real hero!

If Serah pursued Noel, I think he would have got Lightning's approval. She have a huge dislike of Snow but has a huge respect of Noel. I guess Serah is just not into nice guys. Most women these days are into "bad boys" and Noel kinda fill that archetype even though he is heroic.

My favorite ship is Serah X doep djuer. Serah should have chosen me. She won't die if I was with her. I will marry on every single church on Earth. Noel and Snow are nothing compared to me. I am the man who can make her happy.

I would go with Noel because he has every quality, character and attitude to be a better love for Serah. Sometimes, I do see myself in his position in some relationships which I have been in and I would say he is best suited to be the perfect person.

The physical appearance alone of Noel is enough for me to give him the best candidate to be Serah's love. When I go down to his behavior, his character and understanding, it beats every other possible candidate for such mantle. Noel is my guy, he has my unequivocal support.

Getting friend zoned is something that I'm very familiar with especially when you really love the person in question. So therefore, I understand the plight of Noel very well and I would seriously prefer him getting the girl for once in his life.

None of them ends up with Serah though because she is dead. Since Serah is gone, maybe they should love each other.

Addap Earver said:
None of them ends up with Serah though because she is dead. Since Serah is gone, maybe they should love each other.
Click to expand...

Haha, that's one sarcastic way of putting it and giving both them the stick. Well if they were gay, then it would be something possible but I don't think they a are gay, so it's not likely going to happen.

Addap Earver said:
None of them ends up with Serah though because she is dead. Since Serah is gone, maybe they should love each other.
Click to expand...

If you mean casual friendship or love between them, then would say that it's something possible to achieve but if it's like a love relationship, I seriously doubt if that is possible. Seriously, they aren't both not gay, so why would they fall in love with each other?

Well I guess it may not be a possibility if you see it like that, but there can be some kind of personal relationship that does not have to be sexual I suppose. But I guess you will still get that same question over and over so maybe not.

holmes22 said:
Well I guess it may not be a possibility if you see it like that, but there can be some kind of personal relationship that does not have to be sexual I suppose. But I guess you will still get that same question over and over so maybe not.
Click to expand...

holmes22 said:
Well I guess it may not be a possibility if you see it like that, but there can be some kind of personal relationship that does not have to be sexual I suppose. But I guess you will still get that same question over and over so maybe not.
Click to expand...

To make the thirsty female fans happy. I don't think the NoelXSnow have a fanbase though. It is more of a Final Fantasy 15 thing due to the lack of playable females. There is a CloudXSephiroth fanbase though.

Snow is her official love interest. I mean he is very passionate on trying to save her. Yes he is over the top but he is not as bad as his haters say. Noel....People just related because many men are friendzoned by women they loved.
You must log in or register to reply here.
Share:
Facebook Twitter Reddit Pinterest Tumblr WhatsApp Email Share