All Saints' Wake is an event that takes place in Final Fantasy XIV Online each year around this time, and it did not skip 2018. Anyone who logs into the game today will find festive Halloweeny decorations, a haunted mansion to explore and seasonal rewards to earn.

Plus, if any exclusive item appeared during the previous All Saints' Wake that you miss and would like to see again, you can buy it today -- they're all there. All Saints' Wake will disappear once more on November 1, so enjoy it while you can.

LOS ANGELES (October 18, 2018) – Beginning today, FINAL FANTASY® XIV Online players can ‘trick-or-treat’ themselves to the annual All Saints’ Wake event, which runs through Thursday, November 1 at 8:00 AM PDT. All adventurers are invited to take part in this limited-time event and explore a haunted manor, featuring a special questline and many frightful rewards available through this seasonal content. 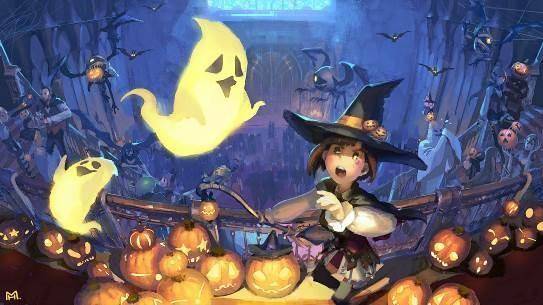 As part of the in-game event, players can earn unique items during this year’s return of the Continental Circus to Gridania, including two ghost minions, Little Yin and Little Yang, and an array of housing items to bring the spooky spirit of All Saints’ Wake into any player home. Furthermore, certain items from past All Saints’ Wake events will be available for purchase during the event period.