When it comes to role-playing games, the Final Fantasy franchise Is king. Although the games name harkens image of a sword and sorcery fantasy title, the game also throws a bit of science fiction into the mix.

Over the years, the Final Fantasy franchise has been known for its unforgettable list of characters and settings. Still although Final Fantasy has created a world rich with Moogles and magical crystals, the thing that really motivates players to continue playing is the hope of getting their hands on some pretty impressive weapons. Some weapons they have become so iconic that they have become just as recognizable as the characters that drive the stories.

My favourite iconic weapon is Save The Queen, which is the most commonly depicted as a knight sword or high sword in the Final Fantasy franchise. What's your iconic weapon? 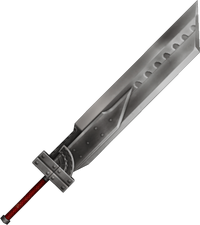 That Sword becomes synonymous to Cloud Strife. It is a simple looking sword yet very iconic.