Here's why I think Rinoa absolutely COULD be Ultimecia...

First, ignore the inconsistency of modality in the title ( i.e. "absolute" "could"), it's done for emphasis. Now, let's talk about why R=U could be true.

According to the theory, the Sorceress Ultimecia is actually a future version of Rinoa, driven mad by grief after Squall's death, who intends to compress time as a way of regaining her beloved friends. But Ultimania counters with,

A Witch’s lifespan is the same as a normal human’s, however they cannot die until they have passed on their power to the next Witch.

So the line of thought is that since Ultimecia is generations into the future, she can't be Rinoa. That's a bit anti-climatic and disappointing, but it's canon now and that's that. Right? Well, no so fast, there's an inconsistency here. If Ultimecia's actions are driven by a means to escape her destined defeat at the hands of the "Legendary SeeD", why would she engage in "Time Kompression"? That would essentially condense all of time and space into a single moment, bringing SeeD closer to her.

If all Sorceresses live a normal timespan, then what was she trying to accomplish through Time Kompression? Time still flows. How would she become a living god, only to die in a normal lifespan during the Kompression? Also, she can't die unless she passes her powers on to yet another sorceresses (so Ultimecia flings her physical self back into time to Edea's orphanage). So then, technically the game contradicts Ultimania, as sorceress have the ability to live forever (thus she already is a living god as long as she chooses to hold on to her powers). Plus, one can't live beyond one's life span.

And then, if a Sorceress has to relinquish her powers, yet Adel is frozen while Rinoa becomes a witch, who gives who whose power? How are there two sorceress at the same time? How does Rinoa inherit Sorceress powers if Adel hasn't relinquished them?

So far, none of this makes any sense unless you consider Ultimecia is Rinoa (and SquareEnix simply eases up on holding to this misaligned plot). After Adel dies, Rinoa would be the sole sorceress. What's to say Rinoa didn't hold on to her powers, because she was scared, "...Really scared...really, really scared" of her mortality during that fight with Edea, and thus vowing never to die. And then she watched the horrifying fate of her friends as they aged. Keeping her witch powers made Rinoa go insane, while junctioning Griffin made her forget SeeD are her friends and that Time Kompression (out of desperation) would be her downfall.

A part of me believes this is what they intended. However, they spoiled it when they felt the need to save face for Rinoa's character as being basically good, and to keep the script a light love story.

The main argument "SquareEnix said so, so R=U is non-canon" isn't impressive. Remember, there's wisdom with Sakaguchi's insistence on the "no sequels" rule. SquareEnix is somewhat incompetent in this area. SquareEnix is known for continuity errors (i.e. FFVII), ad-hoc stories (i.e. FFXIII trilogy), poor pacing (i.e. FFXII) and poor judgement (i.e. FFX's radio drama). I think FFVIII is just another one of their blunders. It's a bit too bad too, because R=U saves FFVIII's internal consistency and gives it more meaning.

I make sure Rinoa or Squall are the only two left, and that one of them gets the final blow. Depending on who defeats her, it changes the meaning of the fight.

Woah! That's a lot of information to take in.

I have a different theory about Ultimecia but I know this theory is one of the most talked about by the fans because of they have resemblance.

There is a facial similarity between Rinoa and Ultimecia.

This is a debunker though:

Most women in Final Fantasy 8 though almost have the same Eurasian doll face.

Seifer_Leonhart said:
I have a different theory about Ultimecia but I know this theory is one of the most talked about by the fans because of they have resemblance.

There is a facial similarity between Rinoa and Ultimecia.

This is a debunker though:

Most women in Final Fantasy 8 though almost have the same Eurasian doll face.
Click to expand... 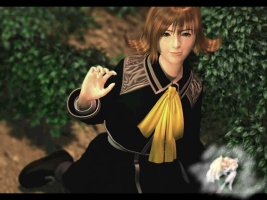 All Final Fantasy 8 women have the same face. That is a huge debunker on Ultimecia being Rinoa.

In FF8 we see Rinoa become a Sorceress partway into the game and Squall's team face Ultimecia a sorceress from the future at the end of the game. The theory claims that the reason why she doesn't recognize Squall is because the summons have wiped her memory. What are your thoughts?